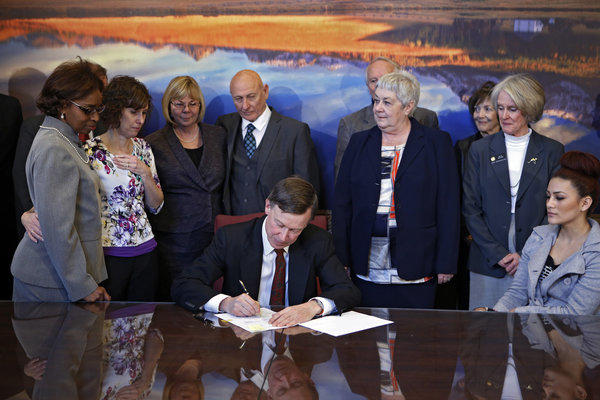 Gov. John Hickenlooper, a Democrat in a Western state where gun-control issues are politically sensitive, signed the law exactly eight months after a gunman shot up a movie theater in Aurora, Colo., killing 12 people and injuring about 70. In the meanwhile, the U.S. Senate has stepped back from some of its more controversial gun control proposals. The signing of the Colorado bill comes just a day after Majority Leader Harry Reid dropped California Sen. Dianne Feinstein’s proposed assault weapons ban. Sandy Phillips, whose daughter Jessica Ghawi was killed in the movie theater, told Hickenlooper: “You’ve given us a real gift today. Thank you so much; you’re leading the entire country.” “I think it will make it more difficult for people to get guns who shouldn’t have them, and that’s really the goal,” Democratic Rep. Beth McCann added about the expanded background screening program. Other Democratic gun control proposals still pending in the state Legislature include a ban on gun ownership by people accused of domestic-violence crimes and a bill to eliminate online-only safety training for people seeking concealed-weapons permits.  ]]>

Conducting background checks on new hires continues to be a standard practice for most companies. The way many organizations operate, hire, and conduct business has changed. One of the biggest changes is the number of individuals who transitioned to working from home. Many employers are now offering teleworking options or even recruiting nationwide for candidates.…
Read More →

Social Media Screening: What You Need to Know

When conducting a background check, the first step is often searching the National Criminal Database. Also known as the Multi-State or the National Search, this search type pulls information from thousands of databases and jurisdictions. It is often the cheapest option and commonly mistaken as the “all-inclusive” background check. Many companies unknowingly rely on only…
Read More →